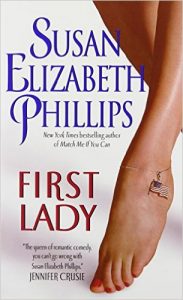 When you think of romance, your first thoughts probably don’t go to a story about politicians or political wives.

But with the GOP convention just over and the Democrats’ just begun, you can actually bury your nose in a book and still keep the theme of presidential politics going if you know where to look.

May we suggest you start with New York Times bestselling author Susan Elizabeth Phillips’s FIRST LADY, the story of a beautiful young widow of the President of the United States who thought in losing her husband she had also been free from political life. But circumstances have forced her back into the White House, and so she decides she must take matters in her own hands to find a few days of freedom. As an entire nation searches for her, the First Lady teams up with an infuriatingly secretive stranger and two orphans in need of a family, and together they head out across the heartland in search of their own American dream. 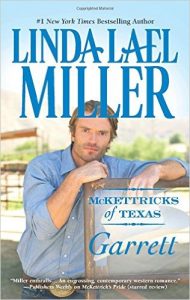 Or if you like your novels with a little political intrigue, you might consider USA Today bestselling author Toni McGee Causey’s Southern Gothic THE SAINTS OF THE LOST AND FOUND. Avery Broussard can see loss—from missed political opportunities to lost bracelets to missing children. She’s been helping the FBI on a missing children’s case when she makes a mistake that results in the death of a little girl. Devastated she heads home to Louisiana, the home of her first love, who just happens to be the son of a corrupt Senator. Has the Senator managed to exact vengeance from the grave? Or will Avery’s gift allow her to bring the killer to justice?

Given that #1 New York Times bestselling author Linda Lael Miller is the daughter of a town marshal, it stands to reason that she may know a few things about small town politics. Maybe that’s why her novel GARRETT, Book 12 in her beloved McKettrick Series, rings so true. Garrett McKettrick was on the political fast track until a scandal brought him home to Blue River, Texas, where he hopes to plan his next move back into the electoral spotlight. What he did anticipate was running into his high school nemesis, Julie Remington, who is now a woman, a mother, and the owner of a three-legged beagle—not to mention a gal with deep ties to the local community. Garrett is a master of the political game but will he fare as well when it comes to the politics of love?

So what about you, dear reader? What novel would you vote for that came with a touch of the political? And what did you like or dislike about it?