Hello, my name is Sheila Connolly and I write three ongoing mystery series for Berkley Prime Crime. In my spare time I write short stories and self-publish single-title mysteries. And suspense. And romance, with a little paranormal stuff thrown in. And I am an addict. People look at me and ask, how do you do… Read More 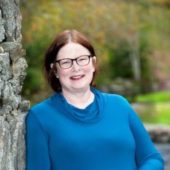 After collecting too many degrees and exploring careers ranging from art historian to investment banker to professional genealogist, Sheila Connolly began writing in 2001, and has now published over thirty traditional mysteries, including several New York Times bestsellers. Her series include the Orchard Mysteries (Berkley Prime Crime), the Museum Mysteries (Berkley Prime Crime), The County Cork Mysteries (Crooked Lane Books), the Relatively Dead Mysteries (Beyond the Page Press), and beginning in 2018, The Victorian Village Mysteries from St. Martin’s Press. Her first full-length, standalone eBook, Once She Knew, was published in October 2012. Connolly has also published a variety of short stories: "Size Matters" appeared in the 2010 Level Best Anthology, Thin Ice; "Called Home," a short prequel to the Orchard series, was published by Beyond the Page in 2011; and "Dead Letters," an e-story featuring the main characters from the Museum series, will be published by Berkley Prime Crime in February 2012. Beyond the Page also published "The Rising of the Moon," and another Level Best anthology includes "Kept in the Dark," which was nominated for both an Agatha award and an Anthony award for 2013. She is passionate about genealogy, both American and Irish, and is a member of the Daughters of the American Revolution and the Society of Mayflower Descendants. She is also an Irish citizen and owns a cottage in West Cork. She lives in a too-big Victorian in southeastern Massachusetts with her husband and three cats.

Romance is Everywhere…Even at the Asylum