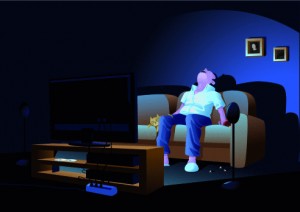 I have a new favorite excuse for being terminally uncool: I can’t remain awake long enough to stay up on things.

Just the other night I got home too late to watch the Project Runway finale for Season 13. Since I’m too cheap to pay for a DVR, recording it wasn’t an option. But wait, Project is on Lifetime, a network that repeats their primetime shows later in the evening.

One second I’m feeling smug about staying awake long enough to watch the final four contestants’ Fashion Week collections. Next thing I know I’m drooling on my chin and an infomercial huckster is trying to sell me a juicer.

It was two and a half hours later and all I could think was “Who won?”

That’s right, I made it through three of the four contestants’ collections but quickly realized I had no memory of the fourth.  I’d fallen asleep and missed the best part.

So, minutes ago I Googled the results.

You guessed it, the fourth designer’s collection—the one I snored through, the one I was most looking forward to seeing—won.

Even after staying awake longer than I knew I should I still didn’t get to watch the whole show. Oh and once I woke up I couldn’t go back to sleep!

The only good news I have about the whole night is I turned off my TV before I could convince myself I needed a new juicer.

HOW ABOUT YOU, DO YOU EVER FIND YOURSELF NODDING OFF DURING SOMETHING YOU REALLY WANT TO WATCH?  IF NOT, DO YOU KNOW SOMEONE ELSE WHO DOES? A FREE COPY OF MY DEBUT NOVEL, MRS. GOODFELLER WILL BE RANDOMLY AWARDED TO ONE PERSON WHO LEAVES A COMMENT BELOW BEFORE THE NEXT WRITERSPACE BLOG IS POSTED.