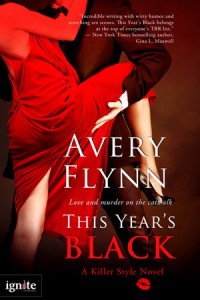 Usually picking a favorite scene in a book is like picking my favorite chocolate from one of those Valentine’s Day boxes—I like them all! I have a ton of scenes that I love in This Year’s Black. There’s the makeover. Sex in a tent (trust me, it’s better than it sounds). The won’t-give-an-inch flirting/bickering. But only one stands out as my favorite.

If she hadn’t run a background check on Devin, Ryder would have sworn he’d grown up, like her, in the working class neighborhoods of Waterberg, far from the ritzy urban enclaves of Harbor City. Talk about being dead wrong. Even if she had a hundred dollars for every pasta noodle she’d eaten in her life, she wouldn’t put a dent in his trust fund.

Devin cleared his throat, never pausing his pounding on the keyboard or bothering to look her way. “You’re staring.”

Yeah, so damn hard her eyeballs were about to fall out. Blinking rapidly, she straightened in the bucket seat and picked an invisible piece of lint from her black chiffon tank top while running through a mental list of shitty ex-boyfriends to remind herself of why she needed to stop ogling her client. No matter how hot he was.

“I was wondering how a white-bread, private-school-attending, eating-Sunday-brunch-at-the-club dude like you ended up with a healthy start to a tattoo bodysuit.” There. That should put him on the defensive.

His fingers paused on the keyboard. “Ten years as a carny.” The clickity clack revved back up to full speed.

Score one for the rich kid. “Tilt-a-Whirl?”

The clacking ceased. He leaned back in his seat and arched his neck from side to side in a move natural to every jock she’d ever dated. Next, he rolled his shoulders under the perfectly-tailored shirt and leveled a heated gaze at her. Appraising and full of dark promise, the look made her clothes too tight to contain her suddenly aching boobs, and her lungs too small to hold the proper amount of oxygen.

“Kissing booth.” He turned his attention back to his laptop.

Years ago, Ryder’s mother had warned her never to poke a bear with a stick. While she’d always remembered her mother’s advice, she hadn’t taken it then and she wasn’t going to now.

Ryder tsk-tsked. “Funny, I figured you for a big draw at the dunk tank.”

A shiver of anticipation danced down her spine. Picking a fight with a client might not be the smartest move, but it was so much better than sprinting across the aisle and jumping his bones at five thousand feet. The butterflies in her stomach disagreed, but what did they know about anything?

This Year’s Black
by Avery Flynn

A fighter since birth, Allegra “Ryder” Falcon would rather trade in her all-black wardrobe for head-to-toe hot pink than let anyone ever see the cracks in her tough exterior. But one night with a stranger changes everything.

Devin Harris may have given up his MMA fighting dreams for high fashion, but that doesn’t mean he isn’t always in control. So when someone embezzles millions under his watch, he isn’t going to let the private investigator working the case go it alone–even if she is the woman who blew him away in bed and then blew him off.

Just when it seems like it couldn’t get any hotter between Ryder and Devin, the case takes them to a tropical paradise where the danger increases. From the catwalk to the pineapple fields, they have to work together to track down the missing millions before the thief finds–and kills– them. 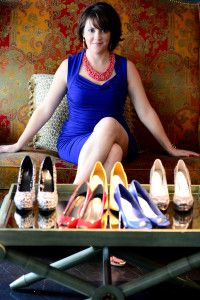 Avery Flynn has three slightly-wild children, loves a hockey-addicted husband and is desperately hoping someone invents the coffee IV drip. Avery was a reader before she was a writer and hopes to always be both. She loves to write about smartass alpha heroes who are as good with a quip as they are with their *ahem* other God-given talents. Her heroines are feisty, fierce and fantastic. Brainy and brave, these ladies know how to stand on their own two feet and knock the bad guys off theirs. 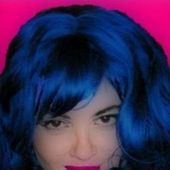 Avery Flynn, author of UP A DRY CREEK, her first published novel and the debut title for her Dry Creek series set in Nebraska, grew up in a small town in the western part of that state, a far cry from her present day home just outside of Washington, D.C. It was no accident that she went back to her roots for the small town setting for her romantic suspense.

“When I graduated high school,” she says, “I couldn’t cross the state line fast enough. The older I got and the farther I moved away, the more I realized what a wonderful place Nebraska had been to live. I swore I’d set a novel there as a way to give people a look into the amazing folks that live in my home state.”

The name Avery Flynn is a pseudonym for the author who, at least for now, prefers to remain behind the scenes. She believes having Avery as her alter ego is a very good thing because, as she says, “Pen name Avery is way cooler than me. Her favorite color is hot pink. She drinks single malt scotch on the rocks. She loves the Argentinean tango and stays at Iceland’s Ice Hotel.”

Author Avery has been writing since she was a child and her father gave her a baby blue Brother typewriter. She couldn’t read but nonetheless wrote numerous stories about her stuffed animals in gibberish. She hasn’t stopped since, though she maintains that her spelling has gotten much better and she now prefers to write in English.

Today she’s enjoying her own happily ever after with her dashing husband, three crazy kids and two arthritic dogs. She dreams of one day having a floor-to-ceiling library à la Beauty and the Beast and is working to perfect the coffee IV drip. For right now, however, she’s happy to have her first book published and to have finished the second, A Dry Creek Bed, which is expected to be published by the end of 2011.

2 thoughts on “A Hot Talking Carny”