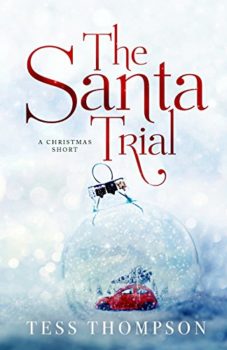 The Santa Trial
by Tess Thompson

Neither Ryan nor Rena is thrilled about jury duty. He’s a widower with a small daughter who needs him. She’s a struggling single woman who can’t afford to miss a day’s pay. But when they spot each other across the courtroom, suddenly jury duty doesn’t seem like such a burden after all.

Together with their fellow jurors, they must decide the fate of a defendant who believes he’s Santa. It’s a seemingly unromantic task for two infatuated strangers, but love could find a way with a little help from the magic of Christmas. Like a stocking stuffed with all the special treats of the season, this Tess Thompson novella is as sweet as sugar plums and as satisfying as a batch of fresh, warm cookies.