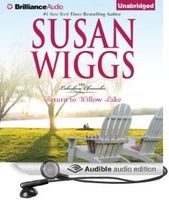 Sonnet Romano’s life is almost perfect. She has the ideal career, the ideal boyfriend, and has just been offered a prestigious fellowship. There’s nothing more a woman wants—except maybe a baby…brother?

When Sonnet finds out her mother is unexpectedly expecting, and that the pregnancy is high risk, she puts everything on hold—the job, the fellowship, the boyfriend—and heads home to Avalon. Once her mom is out of danger, Sonnet intends to pick up her life where she left off.

But when her mother receives a devastating diagnosis, Sonnet must decide what really matters in life, even if that means staying in Avalon and taking a job that forces her to work alongside her biggest, and maybe her sweetest, mistake—award-winning filmmaker Zach Alger. So Sonnet embarks on a summer of laughter and tears, of old dreams and new possibilities, and of finding the home of her heart.

This is an unabridged Audible audio edition, narrated by Joyce Bean.