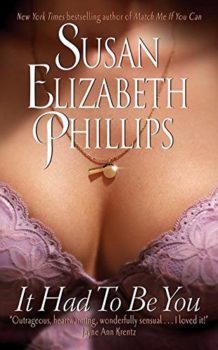 It Had To Be You

It Had To Be You
by Susan Elizabeth Phillips

The Windy City isn’t quite ready for Phoebe Somerville — the outrageous, curvaceous New York knockout who has just inherited the Chicago Stars football team. And Phoebe is definitely not prepared for the Stars’ head coach Dan Celebow, a sexist jock taskmaster with a one-track mind. Celebow is everything Phoebe abhors. And the sexy new boss is everything Dan despises — a meddling bimbo who doesn’t know a pigskin from a pitcher’s mound.

So why is he drawn to the shameless sexpot like a heat-seeking missile? And why does the coach’s good ol’ boy charm leave cosmopolitan Phoebe feeling awkward, tongue-tied…and ready to fight?

The sexy, heartwarming, and hilarious “prequel” to New York Times bestselling author Susan Elizabeth Phillips’ This Heart of Mine — her sensational bestsellng blockbuster — It Had To Be You is an enchanting story of two stubborn people who believe in playing for keeps.

Also published June 2008 in trade paperback and May 2013 in eBook by William Morrow.