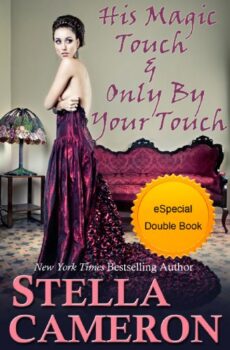 His Magic Touch & Only By Your Touch
by Stella Cameron

HIS MAGIC TOUCH: James St. Giles, Earl of Eagleton, returns to England to exact revenge on the Godwins. Darius and Mary betrayed his parents as they fled to China and the time has come for James to claim what is rightfully his. Irrepressible Celine, the Godwins' daughter, will be brought out this season. This is a sham exercise to keep the truth quiet: she is to be married off to a businessman in order to help her parents line their pockets. James has excellent sources who bring him this welcome news and he wastes no time adjusting his plot to include Celine. But he soon discovers that breaking up the betrothal Celine dreads will have some unintended consequences. HIS MAGIC TOUCH was originally published April 1993 by Avon Books and self published in eBook format November 2012.

ONLY BY YOUR TOUCH: Edward deWorthe, the sixth Viscount Hawkesley, has devised a plan to avenge his brother's death. He will wed, bed and ruin the stepsister of the man responsible for his loss. Lindsay Granville, however, is not what he expected. She is spirited and strong and she possesses a secret that compels her to resist Edward's advances. As Edward stalks his prey, Lindsay finds herself passionately in love. Edward is shocked as his plan evaporates. ONLY BY YOUR TOUCH was originally published August 1992 by Avon Books and self published in eBook format November 2012.