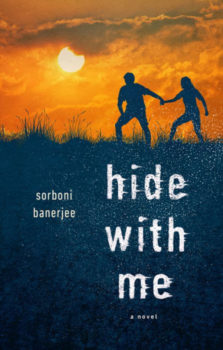 Hide with Me
by Sorboni Banerjee

Debut author Sorboni Banerjee crafts a gripping story about the unbreakable bonds of friendship, the sweeping power of first love, and the courage to fight for a brighter future against all odds.

In the dying cornfields of his family’s farm, seventeen-year-old Cade finds a girl broken and bleeding. She has one request: hide me.

Tucked away in an abandoned barn on the edge of the farm, the mysterious Jane Doe starts to heal and details of her past begin to surface. A foster kid looking for a way out, Jane got caught up in the wrong crowd and barely escaped with her life.

Cade has a difficult past of his own. He’s been trapped in the border town of Tanner, Texas, his whole life. His dad is a drunk. His mom is gone. Money is running out. Cade is focused on one thing, a football scholarship—his only chance.

Cade and Jane spend their nights in the barn planning their escapes, and their days with Cade’s friends: sweet, artistic Mateo and his determined sister Jojo who vows to be president one day.

But it’s not that easy to disappear.

Just across the border in a city in Mexico lies the life Jane desperately wants to leave behind—a past filled with drugs and danger, information she never wanted, and a cartel boss who is watching her every move.

Jane Doe’s past is far from over, and the secret she holds could kill them all.

Sorboni Banerjee is an Emmy Award winning television news reporter and anchor, and author of Hide With Me, a young adult novel hitting shelves this fall 2018. She spent a decade on the air in Boston before moving to Tampa as a consumer reporter and anchor where she writes on deadline every day, fueled by caffeine and creativity. Born and raised in Rhode Island, Sorboni spent her childhood reading, writing, drawing and daydreaming stories. She’s the daughter of an Indian physicist who made her a story teller and showed her the world, a mother from Maine who taught her to love books and save the world, and has a little brother who probably will. Sorboni lives in Florida with her investigative reporter husband, adorable son and giant dog.