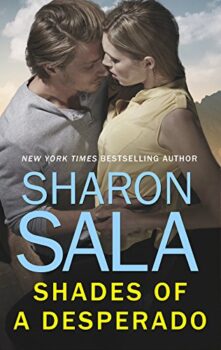 Shades of a Desperado

Shades of a Desperado
by Sharon Sala

This lady loves the outlaw...forever.

Night after night, the visions kept Rachel Brant from sleep---a hard-eyed outlaw straight out of the old West, claiming her as his woman. And though she knew it was madness, still she longed, body and soul, for that fevered dream to become reality....

Then, in one stunning moment, it was made real---by a flesh-and-blood man who stirred her soul just the way her dream lover had. And she had to accept the shattering truth, that she and the mysterious Boone MacDonald were the reincarnation of two long-ago lovers whose story had never been ended---not even by death itself....