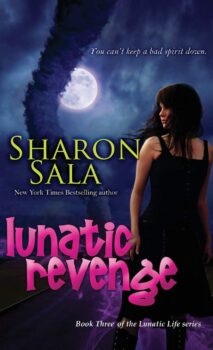 Do Tara and Flynn stand a ghost of a chance?

The bad guys are after a hidden fortune that belongs to Flynn O'Mara's dying father-they think Tara can use her psychic powers to find it for them. She'll need plenty of help from her spirit friends if she and Flynn are going to get out of this trouble alive.

Sharon Sala's stories are often dark, dealing with the realities of this world, and yet she's able to weave hope and love within the words for the readers who clamor for her latest works.

Her books repeatedly make the big lists, including The New York Times, Usa Today, and Publisher's Weekly, and she's been nominated for a Rita seven times, which is the romance writer's equivalent of having an Oscar or an Emmy nomination. Her novels published by Bell Bridge Books include The Lunatic Life Series: My Lunatic Life, The Lunatic Detective, and Lunatic Revenge; also a psychological suspense novel, The Boarding House. Visit her at Sharonsalabooks.com and on Facebook.