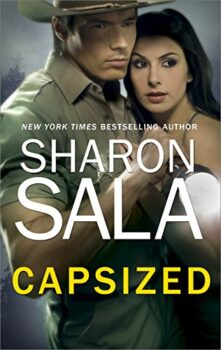 OUT OF DANGER AND...INTO HIS ARMS

Undercover DEA agent Kelly Sloan was tasked with taking down Mexican druglord Dominic Ortega, but when her cover was blown, she barely escaped with her life. After being taken out on his yacht and tortured for information, she literally leapt at the chance to escape overboard, figuring death at sea was better than death at the hands of her vicious captor. But fate had something other than death in mind for her.

Texas Ranger Quinn McCord was dealing with problems of his own, so the last thing he needed was a gorgeous, nearly naked woman with a shady past. And before the unconscious beauty on the beach even came to, he knew she was either trouble or in trouble---maybe both---because the men patrolling the shallows with a speedboat and binoculars weren't tourists out for a day's fishing. His finely honed instincts told him that she was their quarry, and that he had to protect her and find out what was really going on.

If Kelly was shocked to find herself waking up in the arms of a handsome stranger, Quinn was no less surprised to discover that his damsel-in-distress was a very capable agent who'd quite possibly killed the infamous Dominic Ortega before getting away. Unfortunately for them both, Ortega hadn't died. Instead he'd put a two-million-dollar bounty on her head and sent his army of killers-for-hire in pursuit.

Now Kelly and Quinn are both the pursued and the pursuers as they try to stay alive long enough for Kelly to testify against Ortega---and for the two of them to follow up on the once-in-a-lifetime attraction neither one of them wants to fight.