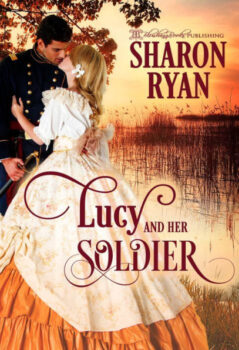 Lucy and Her Soldier

Woman and Her Man Book 2

Lucy and Her Soldier
by Sharon Ryan

Lucy Wilson lacks confidence in herself and in her healing abilities. When she saves the wounded town smithy, Lucy’s father sends her to train with an old medicine woman named Gurty Jones in the new Union Colony just northwest of town. There, she learns as she mends her first patient, the handsome Liam Julian, a soldier returning from the Red River War who is haunted by his deeds on the battlefields of Texas.

Liam soon realizes Lucy does not believe in herself. He takes it upon himself and his firm hand to correct her behavior, to help Lucy see herself as beautiful and talented—just as he sees her. Lucy begins to fall for Liam; however, she worries a strong, dashing man like Liam would want nothing to do with her. Just as Lucy begins to see herself as Liam sees her, she seemingly makes a fatal mistake and flees. Can Liam help Lucy develop the confidence in herself to heal her fellow townspeople? Can he forgive his past and conquer a menacing rival who follows him in search of revenge? Can the couple live together in peace?

This is book two in A Woman and Her Man series and can be enjoyed independently.

Sharon Ryan was born and raised in Colorado. Early in life, Sharon developed a love for horses, the old west, and science fiction. Currently, Sharon is a cat mom to six felines: Henri, Buttercup, Rhubarb, Lilli, Sheba, and Waldo. She also enjoys turtles and shares her backyard with a red-eared slider named Jacques. Sharon assists pet guardians as well as teaches and tutors writing at various Colorado colleges.