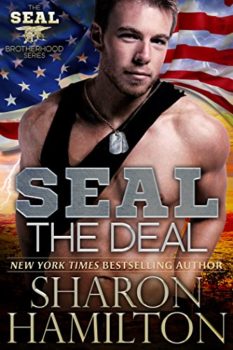 SEAL The Deal
by Sharon Hamilton

Special Operator Nick Dunn gets the call he has been dreading since before his last deployment. His sister needs him to come home.

Devon Brandeburg, is Nick’s sister’s best friend. Her career is her main focus and she insists that she doesn’t need a man to mess it all up. Especially not one with an ego the size of Nick Dunn’s. Being forced to work with him isn’t something she wants or needs, but honoring her best friend’s wish is more important.

What starts as a simple promise turns out to be a hot affair neither one expected. When Nick finds out both the women he holds dearest are in jeopardy, he does what he has to. He’s too late to save one of them, but will he be able to save the other?