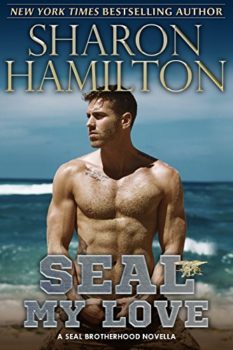 SEAL My Love
by Sharon Hamilton

A continuation of SEAL My Love novella, which appeared in the anthology Tropical Tryst.

Navy SEAL Trace Bennett has recovered from injuries he sustained while rescuing Gretchen’s daughter, Clover, from kidnappers. The man who “wouldn’t let go” finds himself now tied to the single mom of three girls, by strings of duty, honor and, to be perfectly honest, lust. He’s killed bad guys all over the world, and rescued his share of innocents, but he isn’t sure that properly qualifies him for fatherhood.

Gretchen has opened her heart one more time to a man she did not expect to fall for. But she’s determined this will be the last time. She’s dusted off her mating skills and tried to melt the ice she feels in her veins towards men in general. Formerly married to a famous NBA star who cheated on her publicaly, she’s only got room in her life for one more chance at love. Her primary mission is to raise her three daughters and whatever else she gets for herself comes second. Dating a man who has failed at marriage isn’t a great start to her new quest, but she holds her nose and jumps in feet first.

Their rocky road to redemption will bring them more pain than they ever imagined, and more happiness than either of them feel they deserve.