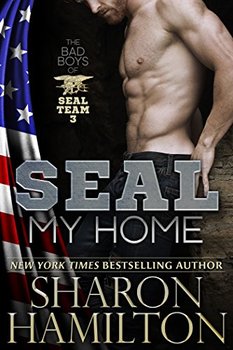 SEAL My Home
by Sharon Hamilton

Bad boy Rory Kennedy was raised in foster care, bouncing in
and out of trouble along the way. He finds his true family
and real brothers as a Navy SEAL, one of the Navy’s
elite warriors. When his BUD/S instructor barked the
SEAL’s Motto: Only Easy Day Was Yesterday, he knew he
had found home.

Megan Palmer works in a bookstore and
finds her passion in life through reading steamy romance
novels. Her brief affair with a man she later found out was
married has left her damaged, until she meets the handsome
SEAL, who stands ready to open her world and give her things
she’s only dreamed.

On a skiing trip, Rory suffers
a possible career-ending injury and also comes face to face
with a past he never knew of, and a family who had abandoned
him. His relationship with Megan is tested to the breaking
point as Rory wades through the dark waters of recovery and
whether or not he can live without the life he loves. A
home-grown terrorist cell forces his hand and he discovers
his true purpose.