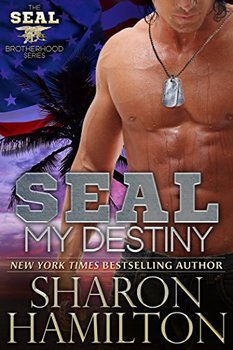 SEAL My Destiny
by Sharon Hamilton

This book can be read as a stand alone or out of sequence. Portions of this book appeared in an anthology. This is the expanded and enhanced full length version.

Navy SEAL Luke Paulsen, on the verge of PTSD stemming from the death of his fiancée and a brutal tour overseas, knows he is damaged goods and
unsuitable for relationships. While paying respects to a fallen comrade, he is unprepared for the chemical attraction he feels for the carefree dark-haired beauty playing in the surf one evening.

Julie Christensen befriends the
troubled SEAL, motivated by her yearning to soothe the young man’s troubled soul. Fueled by intense mutual desire, they succumb to one night of mind-numbing passion. Afterwards, he is unable to shed the memory of his lost love and disappears.

When they meet again at a wedding that will forever bring their two families together, their passion and longing for one another forces them to confront
their pasts in order to find a future together.

But soon the trauma of his service separates them. Julie goes back to
teaching and Luke deploys for North Africa with SEAL Team 3. Upon his return, he receives a frantic call that Julie’s life is in danger. Will he make it in time to save the woman he now knows he wants to marry and spend the rest of his life with?