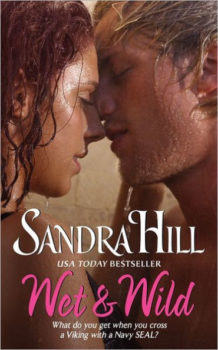 What do you get when you cross a Viking with a Navy SEAL?

A warrior with fierce instincts of the past and the rigorous training of America’s most elite fighting corps . . .

A totally buff hero-in-the-making who hasn’t had a woman in roughly a thousand years . . .

A wise guy with a time-warped sense of humor drilling with the boys . . .

A dyed-in-the-wool romantic with a hopeless crush on his seriously hot, hands-off superior officer . . .

You get every woman’s dream-man come true! And even though his adjustment to the modern rules of love may be a bit . . . rough, the outcome will most definitely be . . . Wet & Wild