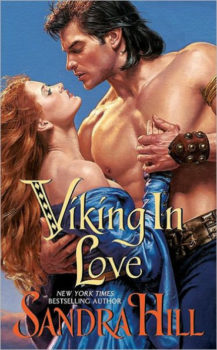 Viking in Love
by Sandra Hill

Caedmon of Larkspur is the most loathsome lout I have ever encountered! When my sisters and I arrived at his castle, we were greeted by servants and children running wild, while Caedmon lied abed after a night of ale. No doubt there will be another child soon, because I must admit he’s as handsome as he is virile. And I must endure him, for we are in desperate need of protection, though I can only imagine what this knight will demand of me in return . . .

After nine long months in the king’s service, all I wanted was peace . . . not five Viking princesses running my keep. And the fiery redhead who burst into my chamber that first morning is the worst of all. Why, I should kick her out . . . but I have a much more wickedly delightful plan for Breanne of Stoneheim, one that will leave her a Viking in lust.