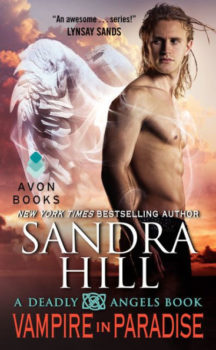 Vampire in Paradise
by Sandra Hill

The vangels are back in Vampire in Paradise, the latest in Sandra Hill’s bestselling Deadly Angels series.

It’s been centuries since the Norseman Sigurd Sigurdsson was turned into a Vangel—a Viking Vampire Angel—as punishment for his sin of envy, but he’s still getting the hang of having fangs that get in the way when seducing women. Slaying demon vampires known as Lucipires and using his healing gifts as a cancer research doctor, Sigurd is sent to Florida’s Grand Keys Island as a resident physician . . . where he encounters a sinfully beautiful woman.

The only hope Marisa Lopez has of curing her five-year-old daughter is a pricey experimental procedure. When she meets the good-looking doctor, Marisa is speechless. Then Sigurd tells her he believes he can help her daughter. Could this too-hot-to-resist Viking doctor be an angel of some sort sent to bring a miracle for her daughter? Or is he just a vampire bent on breaking Marisa’s heart?