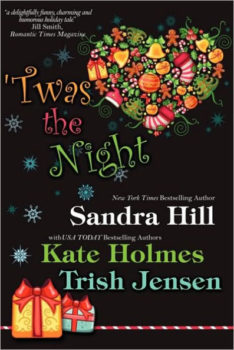 What do a Blue Angels pilot, a bounty hunter and an ex-NFL football player have in common? The three bad-boy bachelors of Snowdon, Maine have to make a friend’s Christmas Eve wedding on time or die trying! They’re willing to risk anything to make that happen—even dashing through the snow in the goofiest bus on Earth, bright red and filled with a bunch of merry, meddling senior citizens known as the Santa Brigade. All too soon, these men will have met their matches in three special women: a woman from their past, a forest ranger so hot she ought to be declared a fire hazard, and a woman on the run.

While serving up holiday cheer with the Santa Brigade, the guys will discover ’tis the season for good will and folly. Wise men or not, they are well and truly caught, which means these roguish St. Nicks are willing to jingle a few bells along the way if that’s what it takes to find what they truly want for Christmas nestled in their beds after the stockings are stuffed and the gifts placed under the tree.