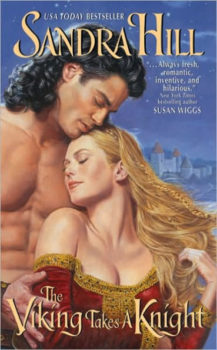 The Viking Takes a Knight

The Viking Takes a Knight
by Sandra Hill

THE VIKING IS A PRINCESS...

And all she wants is refuge for herself and one unique orphan from a vicious Saxon commander who would harm the children and destroy her honor. At her age, she no longer expects to find a husband, or even a lover, especially not the arrogant Lord of the Bees!

And what he longs for is peace and quiet. John of Hawk’s Lair is certainly not seeking a nagging wife and noisome children. As a knight in the king’s service, he spends his cherished time at home working on his beekeeping experiments. So when an irksome Viking princess comes barging into his castle with a horde of orphan children he does everything he can to get rid of her.

TOGETHER THEY MADE HONEY...

And find a sexual attraction that sparks between them despite their differences, one that soon turns into a fiery love that neither can deny.