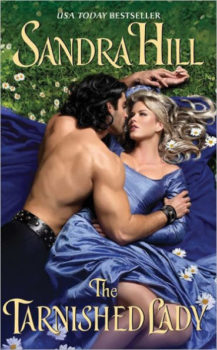 The Tarnished Lady
by Sandra Hill

Banished from polite society for bearing a child out of wedlock, Lady Eadyth of Hawks’ Lair spends her days hidden under a voluminous veil, tending her bees. But when her son’s detested father threatens to reveal the boy’s true paternity and seize her beloved lands, Lady Eadyth seeks a husband willing to claim the child as his own.

Eirik of Ravenshire is England’s most virile bachelor, notorious for loving—and leaving— the most beautiful damsels in the land. Now a mysterious lady is offering him a vow of chaste matrimony in exchange for revenge against his most hated enemy, and Eirik simply cannot refuse. But the lusty knight’s plans go awry when he finds himself unable to resist Eadyth’s myriad charms . . . and he succumbs to the sweet sting of the tarnished lady’s love.