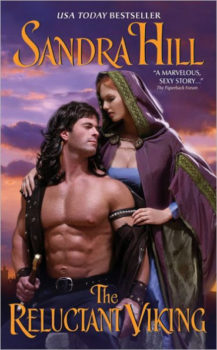 The Reluctant Viking
by Sandra Hill

The hypnotic voice on the self-motivation tape was supposed to help Ruby Jordan solve her problems, not create new ones. Instead, she was lulled from a failing marriage to an era of hard-bodied warriors and fair maidens.

But the world ten centuries in the past didn’t prove to be all mead and mirth. Ruby had to deal with a Norseman who had her husband’s face, habits, and desire to avoid Ruby. Determined not to lose the same man twice, Ruby planned a bold seduction that would conquer the reluctant Viking—and make him an eager captive of her love.