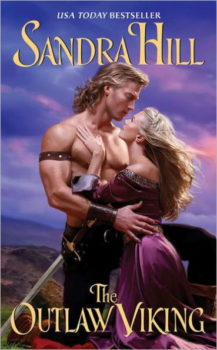 The Outlaw Viking
by Sandra Hill

As tall and striking as the Valkyries of legend, Dr. Rain Jordan is proud of her Norse ancestors despite their warlike ways. But she can’t believe her eyes when a blow to her head transports her to a nightmarish battlefield of yore—and there standing before her is the barbarian of her dreams.

A wild-eyed berserker, Selik can slay a dozen Saxons with a single swing of his deadly sword—yet he can’t control a saucy wench from the future. In his eyes, Rain is a prisoner and he’d dearly love to avail himself of her medical skills—not to mention her considerable knowledge of the male anatomy. But the infuriating woman has ideas of her own. If Selik isn’t careful, the stunning siren might very well capture his savage heart and make a warrior of love out of . . . The Outlaw Viking