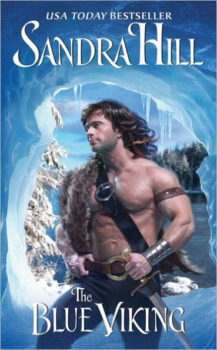 The Blue Viking
by Sandra Hill

What in the name of Thor could be making this Viking so blue? Eating haggis? Listening to those insufferable bagpipes? Traveling through Scotland with the world’s worst poet? Searching for the infuriatingly inept witch who’s cursed his face . . . and even more important parts?

For Rurik the Viking, life has not been worth living since he left Maire of the Moors. Oh, it’s not that he misses her fiery red tresses or kissome lips. Nay, it’s the embarrassing blue zigzag she put on his face after their one wild night of loving. For a fierce warrior who prides himself on his immense height, his expertise in bedsport, and his well-honed muscles, this blue streak is the last straw. In the end, he’ll bring the witchling to heel, or die trying. Mayhap, he’ll even beg her to wed . . . so long as she can promise he’ll no longer be . . .