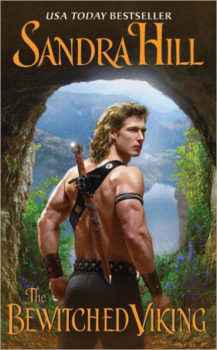 The Bewitched Viking
by Sandra Hill

‘Twas enough to drive a sane Viking mad, the things Tykir Thorksson was forced to do—capturing a red-headed virago, putting up with the flock of sheep that follows her everywhere, chasing off her bumbling brothers. But what could a man expect from the sorceress who had put a kink in the King of Norway’s most precious body part?

If that wasn’t bad enough, Tykir was beginning to realize he wasn’t at all immune to the enchantment of brash red hair and freckles. Perhaps he could reverse the spell and hold her captive, not with his mighty sword, but with a Viking man’s greatest magic: a wink and a smile.