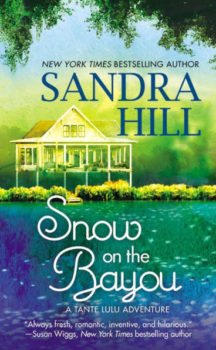 Snow on the Bayou

Snow on the Bayou
by Sandra Hill

THE BAYOU’S BADDEST BAD BOY IS BACK!

Joining the Navy was the second best thing that ever happened to Justin “Cage” LeBlanc, the rebel son of a no-account convict. The first was Emelie Gaudet, the love of his life . . . until he was forced to leave town and swore there would be snow on the bayou before he ever returned. Now, only his mortally ill grandma can bring the injured Navy SEAL back to Terrebone Parrish, where he must face his past—and Emelie, who’s even more beautiful than she was all those years ago.

Bourbon Street blues singer Emelie is once bitten, twice shy. When she learns that Justin is back in town, she wants nothing to do with the once wild Cajun teenager who fled with the law on his tail—and broke her heart. But she can’t deny the red-hot attraction between them . . . or his efforts to prove he’s finally changed his hell-raising ways. Can she trust that this time the bad boy of the bayou will be the best man for her?