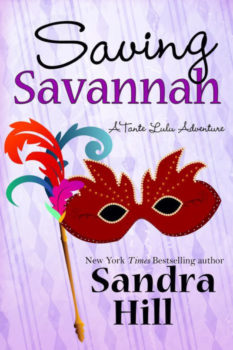 When Tante Lulu decides to matchmake, matches are made. But this time, her meddling Cajun charm will be put to the test . . .

For five years Savannah Jones thought Special Forces Captain Matthew Carrington died in Afghanistan. For five years he thought she’d rejected him—thanks to his mother’s interception of the letter she wrote to him as he left on his tour of duty. Now she’s struggling to re-build a life for herself and their daughter, Katie, despite the devastation Katrina wrought on New Orleans. Thanks to Tante Lulu and her police-officer great-nephew, Tee-John, Savannah and Matthew are about to be reunited. Will Tante Lulu’s bayou wisdom and sassy attitude be able to turn their broken relationship into a loving gumbo?

Sandra Hill is the New York Times and USA Today bestselling author of more than thirty romantic humor novels. Whether they be historicals, contemporaries, time travels, or Christmas novellas, whether they be about Vikings, Cajuns, Navy SEALs or sexy Santas, the common element in all her books is humor. It’s been said that love makes the world go ’round, but in Sandra’s world, love with a dash of laughter, makes it spin.