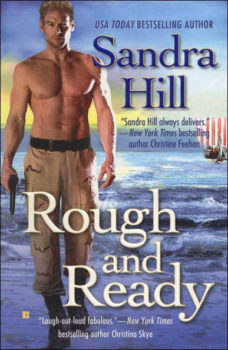 Rough and Ready
by Sandra Hill

A mission of no mercy

It takes nothing short of a miracle to catapult Lt. Torolf Magnusson and his team of Navy SEALs back in time to eleventh-century Norselands. First on the agenda: destroy the evil villain who terrorized his ancestors and a nation.

A surrender so sweet

But when the sexy SEALs find they've landed in the middle of a sanctuary—filled with women, well, Hoo-yah! Their game plans are put on hold, much to the distress of Hilda, the head of the sanctuary. At first resistant, she soon succumbs to Torolf's passionate advances. Suddenly the term "Special Forces" takes on a whole new meaning. But with victory in sight for Torolf, Hilda must face the fact that their love may not survive the test of time...