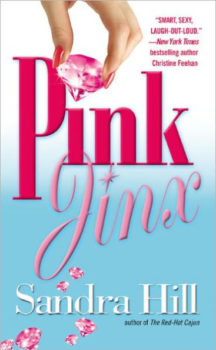 Caught! Straight-laced Boston lawyer Veronica "Ronnie" Jinkowsky knows something's fishy when her estranged grandfather lures her to his New Jersey treasure hunting business with woeful tales of old age and bankruptcy. But she never expected the salty old dog to shanghai her into a hunt for pink diamonds with her poker-playing, four-time ex- husband Jake Jensen in tow.

Betting her heart on Jake was always a losing proposition; yet just the sight of his come-hither blue eyes is still enough to melt her steely resolve. Now she's on a high seas' adventure that throws together lost gems, lost ship, and lost love--not to mention a Mafia widow, her two goons, and an elderly Cajun matchmaker hankering for hanky-panky--

AND GOING DOWN FOR THE LAST TIME!

Ronnie is trapped with the man she could never learn to live with--and was never happy without. A jinx of the best possible kind.