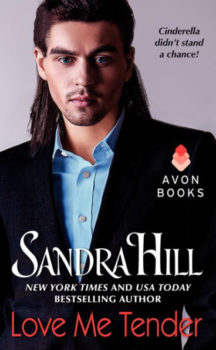 Love Me Tender
by Sandra Hill

Prince Pedro Tomas “P.T.” de la Ferrama is the owner of a high-end shoe company that promises comfort in addition to fashion. But when Cynthia “the Shark” Sullivan, a hot-shot Wall Street trader, claims his shoes gave her a corn that caused her to lose her job, P.T. must do some serious damage control using his royal charisma—a strategy that’s never failed him. But the leggy strawberry blonde is immune to his charms, much to his frustration. For all he can think about is getting tangled in the sheets with her.

Cynthia never settles for less than the best. So when her luxury-brand shoes don’t live up to the company’s guarantee of quality, she vows to make them pay. But when she meets P.T., she doesn’t count on being insanely attracted to him. She can’t afford any distractions if she hopes to take his company to the cleaners. But the more she gets to know this unlikely prince, the more she finds herself wishing he’ll place a glass slipper on her foot—and make her his princess.