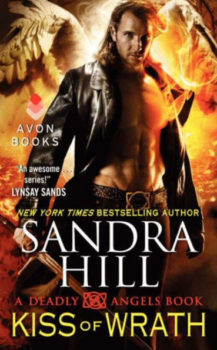 Kiss of Wrath
by Sandra Hill

The vangels are back in Kiss of Wrath, the latest in Sandra Hill’s bestselling Dark Angels series

No wicked wenches or wild rampages . . . it’s been centuries since Mordr the Berserker was turned into a vangel—a Viking vampire angel—as punishment for his sin of wrath, and he’s been frustrated ever since.

It’s not so bad being stuck in modern-day Las Vegas. What better place to slay Lucipires, or demon vampires, than the original Sin City? But then Mordr Sigurdsson’s mission is expanded to a new assignment: protect lust-worthy Miranda Hart.

Miranda’s well-ordered life turned into chaos when she unexpectedly inherited her late cousin’s five children. Now, her cousin’s dangerous husband is about to be paroled, and she needs a miracle to keep them all safe.

As Miranda and Mordr give in to temptation, they must decide if they fit in each other’s worlds—before their enemies close in on them.