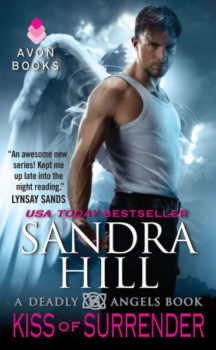 Kiss of Surrender
by Sandra Hill

It’s not easy being a Vampire Angel

No one knows that better than Trond Sigurdsson. In the centuries since he last went out drinking and wenching with his Viking buds, Trond has been a gladiator, a cowboy, a ditch digger...even a sheik. But now he’s the baddest of them all: a kick-butt Navy SEAL kicking butts of terrorist immortals with the help of his hotter-than-Hades female partner, police officer-turned-Special Forces operative Nicole Tasso—whom Trond dearly hopes to “partner” with very shortly in a whole different way.

It’s not easy being a Vangel’s lover

The “cop” part of Nicole tells her there’s something bizarre about her gorgeous godlike teammate. But her “all-woman” side can’t help wondering how great it would be to have a virile Viking in her bed. Trond has secrets galore, but Nicole feels certain she can dig them out—and really get to the heart of this powerful, unnerving stranger whom she may be risking her soul to love.