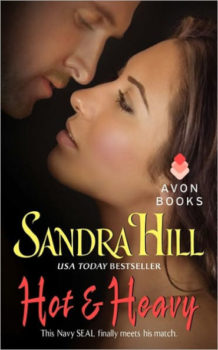 That’s Lieutenant Ian MacLean’s goal. The leader of a team of highly trained Navy SEALs—the toughest, buffest fighting men in the world—the sexy, hard-as-nails bachelor has the brains, guts, and brawn to outthink, outgun, and outmaneuver any enemy. But dealing with a buxom, headstrong, iron-willed Viking maiden from a time a thousand years before Ian was born . . . that’s a whole different kind of warfare.

Madrene Olgadottir has no idea where she is or that she’s landed ten centuries in the future. After bopping the arrogant soldier on his head and tying him up, the stunning hellion gives him a tongue lashing that makes a drill sergeant sound like a kindergarten teacher. Then she demonstrates that she has her own special way of dealing with overconfident males.

Hoo-yah, it looks like Operation Rodent is about to get . . . Hot & Heavy