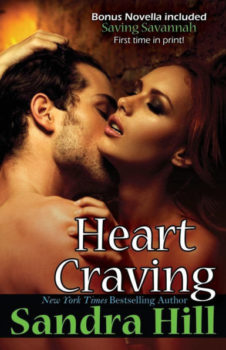 “Too funny for words.” —All About Romance

They share love, laughter, and a passion that burns up the night.

But can he share the secrets that threaten their marriage?

Nick and Paula DeCello are getting divorced in seven days, even though they love each other dearly. His overprotectiveness has finally become too much for her, and there“s something painful locked deep inside him. Desperate, Nick takes the advice of a quirky, old fortune teller to find his wife“s “heart craving.” To Nick, that means sexual fantasies.

Armed with a hilarious collection of advice books, he embarks on a wild, funny seduction of Paula that proves there’s nothing wrong with their relationship in the bedroom. When it comes to giving her what her heart really craves-soul—sharing communication—he’ll have to take a big step outside his comfort zone.

HEART CRAVING is a revised/reissue from within the August 1997 and July 2004 LOVESCAPE anthology by Leisure Books.