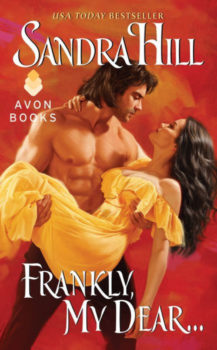 Frankly, My Dear
by Sandra Hill

Lost in the Bayou...

Selene has always had three great passions: men, food . . . and Gone With the Wind. Still, the glamorous model always seems to be starving for both nourishment and affection. Weary of the petty world of high fashion, she heads to New Orleans for one last shoot before she chucks it all and begins a whole new life. But she doesn’t realize that, thanks to an errant voodoo spell, her new life will happen 150 years in the past . . . and in the company of a dark and brooding gentleman who could give Rhett Butler a run for his money!

An alarmingly handsome Southern planter, James Baptiste may not have Rhett’s cavalier spirit—and his plantation is certainly no Tara! But it’s clear as crystal that this virile Creole is a lover worth giving a damn about. And with God as her witness, Selene vows she will never go hungry for this man again!

Originally published July 1996 and reissued October 1999 and May 2003 in mass market paperback by Leisure Books.