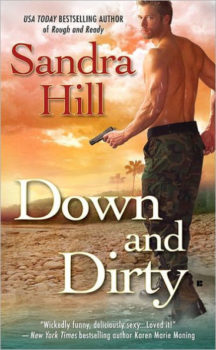 Down and Dirty
by Sandra Hill

He's a world-class player—nicknamed Pretty Boy—and a tough guy who's not afraid to get down and dirty. But now, Navy SEAL Zachary Floyd is up for Worst Father of the Year. Turns out that a fling six years ago in Afghanistan resulted in a son Zach never knew existed. When Zach steals Samir away to America, defying protocol, his punishment is to teach a new SEAL-like program for females. There he encounters an alluring Norsewoman who's not his usual style. She's tall, she's muscular, and, worst of all, she rebuffs his advances...

A VIKING WARRIOR MAIDEN
She's escaped a nunnery, her evil father—and the whole bloody eleventh century. So, holy Thor, why can't Britta, time-traveling Viking maiden, escape her growing feelings for Zach? Especially after he has the nerve to ask her to babysit his child! Britta quickly grows fond of Samir and will do whatever it takes to protect him. But she's losing her fight against Zach's considerable charms. In fact, she might even be willing to get a little... DOWN AND DIRTY