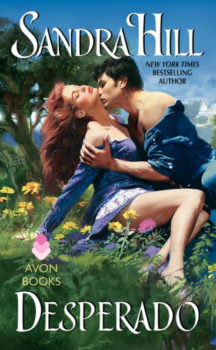 Major Helen Prescott always played by the rules. That’s why Rafe Santiago nicknamed her “Prissy” at the military academy years before. But it wasn’t just Rafe’s teasing that got under her skin. His irresistible good looks made Helen lose control on one unforgettable night. So when a stint in the National Guard brings Rafe under her command, she not only lays down the law with him, but swears to herself she’ll resist him. When a routine skydive goes horribly wrong, all bets are off as they find themselves parachuting back in time to the 1850 California Gold Rush.

Mistaken for a notorious bandit and his infamously sensuous mistress, Rafe and Helen are now on the wrong side of the law. As they try to stay one step ahead of the authorities, they surrender to temptation. But will their desire be strong enough to keep them together if they ever find their way back to the present . . . ?

Originally published March 1997 and reissued November 2006 in mass market paperback by Love Spell and July 2010 in eBook by HarperCollins.