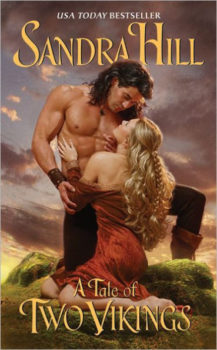 A Tale of Two Vikings

A Tale of Two Vikings
by Sandra Hill

Has an eye for the ladies, loves a good fight. Splits his sides over rude jokes. Won’t ask directions no matter how lost he is . . . even in a longship, for the love of Odin! Sound like anyone you know? Maybe every man you know?

Toste and Vagn Ivarsson are all that and more—a lot more. Identical Viking twins, they came squalling into this world together, rode their first horses at the age of seven, their first maids during their thirteenth summer, and rode off on longships as untried fourteen-year-old warriors. And now, having seen only thirty and one winters, they are about to face Valhalla together. Or maybe something even more tragic: being separated. For even the most virile Viking must eventually leave his best buddy behind and do battle with that most fearsome of all opponents—the love of his life.

Originally published May 2004 in mass market paperback by Leisure Books.