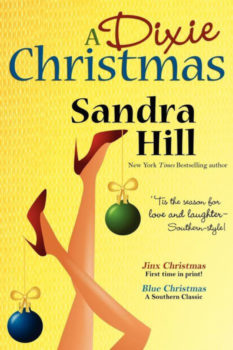 A Dixie Christmas
by Sandra Hill

Wealthy Wall Street businessman Clayton Jessup III has only one reason for arriving in Memphis a few days before Christmas—to sell off his inheritance, an embarrassingly kitschy hotel named The Blue Suede Suites. His feelings for the Land of Elvis are dark: his long-dead Memphis mother abandoned him and his dad when Clay was a baby, and now Clay wants nothing to do with a southern legacy that couldn’t be more different from his sophisticated big-city life. But then he steps in trouble—literally—when he confronts the bizarre group of Elvis impersonators who’ve set up a living Nativity scene on his property. One slip of a wingtip in some sheep poop lands Clay in the care of gorgeous Annie Fallon, whose big-haired Elvis-girlfriend get-up can’t hide her wholesome, sexy appeal.

Annie and her brothers have set up the Nativity scene to earn some badly needed money for their struggling dairy farm. The last thing she needs is an angry Yankee with a concussion and a come-hither smile . . .

Read an excerpt from 1998 anthology

In Jinx Christmas sexy NASCAR star Lance Caslow makes a last-ditch effort to win back his ex-wife Brenda. Five years ago, his reckless pursuit of racetrack fame tore them apart and broke Brenda’s heart. Now Lance shows up in Louisiana determined to make things right this Christmas, not just for himself and Brenda, but for their young daughter, Patti.He’s got his work cut out for him, and desperate measures are needed. Lance will do anything to prove he’s worthy of Brenda’s trust again—even join the Cajun Christmas show starring a raucous Cajun family whose menfolk dance for charity events in little more than a smile . . .