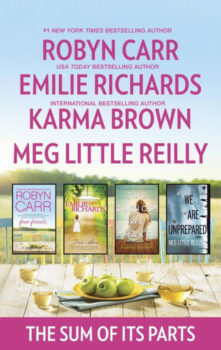 The Sum of Its Parts

The Sum of Its Parts
by Robyn Carr

Four stories about the relationships that define a life, making it greater than the sum of its parts. Chosen for your enjoyment by the editors at MIRA Books, and available for the first time in a value-added box set.

A group of women are determined to find their stride again. BJ, a newcomer to Mill Valley, steps into a close circle of friends and changes everything. The woman with dark secrets opens up to her neighbors, and together they get back on track, stronger as individuals and unfaltering as friends.