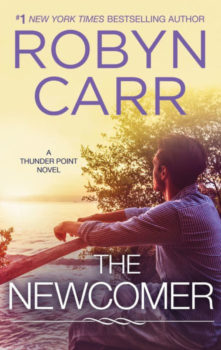 The Newcomer
by Robyn Carr

Welcome back to Thunder Point, a town in Oregon where the people look out for each other, and newcomers are welcome to make a fresh start. Book two in the bestselling series from Robyn Carr.

Single dad and Thunder Point’s deputy sheriff “Mac” McCain has worked hard to keep his town safe and his daughter happy. Now he’s found his own happines with Gina James. The longtime friends have always shared the challenges and rewards of raising their adolescent daughters. With an unexpected romance growing between them, they’re feeling like teenagers themselves—suddenly they can’t get enough of one another.

And just when things are really taking off, their lives are suddenly thrown into chaos. When Mac’s ex-wife shows up in town, drama takes on a whole new meaning. Mac and Gina know they’re meant to be together, but can their newfound love withstand the pressure?

What We Find
Sullivan Crossing Book 1