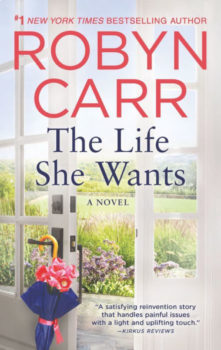 The Life She Wants

The Life She Wants
by Robyn Carr

#1 New York Times bestselling author Robyn Carr creates an uplifting ensemble of characters in this rags-to-riches-to-rags novel about women, friendship and the complex path to happiness.

In the aftermath of her husband’s crimes, Emma Compton’s world is shattered. Richard Compton stole his clients’ life savings to fund a lavish life in New York City and, although she was never involved in the business, Emma bears the burden of the fraud.

Only one friend stands by her, a friend she’s known since high school, who encourages her to come home. But starting over isn’t easy, and Sonoma County is full of unhappy memories, too. And people she’d rather not face, especially Riley Kerrigan.

Riley and Emma were like sisters—until Riley betrayed Emma. Emma left town, planning to never look back. Now, trying to stand on her own two feet, she can’t escape her husband’s reputation and is forced to turn to the last person she thought she’d ever ask for help—Riley. It’s an uneasy reunion as both women face the mistakes they’ve made over the years. But if they find a way to forgive each other—and themselves—each of them can find the life she wants.

What We Find
Sullivan's Crossing Book 1