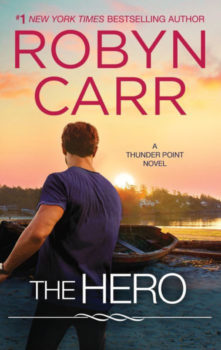 The Hero
by Robyn Carr

Come back to Thunder Point! From the #1 New York Times bestselling author of the Virgin River series, book 3 in her beloved Thunder Point novels, where falling in love can be the bravest act of all.

In a moment of desperation, Devon McAllister takes her daughter and flees a place where they should have been safe and secure. She has no idea what is around the next bend, but she is pretty certain it can’t be worse than what they’ve left behind. Her plan is to escape to somewhere she can be invisible. Instead, an unexpected offer of assistance leads her to Thunder Point, a tiny Oregon town with a willingness to help someone in need.

As the widowed father of a vulnerable young boy, Spencer Lawson knows something about needing friendship. But he’s not looking for anything else. Instead, he’s thrown his energy into his new role as Thunder Point’s high school football coach. Tough and demanding to his team, off the field he’s gentle and kind…just the kind of man who could heal Devon’s wounded heart.

Devon thought she wanted to hide from the world. But in Thunder Point, you find bravery where you least expect it…and sometimes, you find a hero.