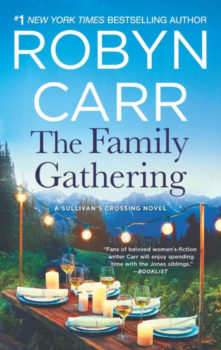 The Family Gathering
by Robyn Carr

The Family Gathering captures the emotionally charged dynamics that come with being part of a family. Readers will laugh and shed a few tears as they discover what it means to be loved, supported and accepted by the people who mean the most.

Having left the military, Dakota Jones is at a crossroads. With his brother and one sister happily settled in Sullivan’s Crossing, he shows up hoping to clear his head before moving on to his next adventure. He’s immediately drawn to the down-to-earth people and the seemingly simple way of life.

But Dakota is unprepared for how quickly things get complicated. As a newcomer, he is on everyone’s radar—especially the single women in town. While he enjoys the attention, he’s really only attracted to the one woman who isn’t interested.

When the Jones siblings all gather for a family wedding, the four adults are drawn together in a way they never were as children. In the struggle to accept each other, warts and all, the true nature and strength of their bond is tested. They come to realize that your family are the people who see you for who you really are and love you anyway. And for Dakota, that truth allows him to find the home and family he’s always wanted.