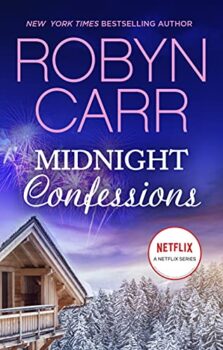 Drew Foley and Sunny Archer are each visiting Virgin River for the holidays. Sunny was dumped at the altar the previous New Year's Eve and is in no mood to celebrate. But her uncle and his fiancée drag her to Jack's Bar. Drew, getting over his own heartbreak, sees Sunny across the crowded room and he's instantly smitten.

As the townspeople gather, two lonely revelers decide the best balm for their broken hearts might just be each other.

What We Find
Sullivan's Crossing Book 1