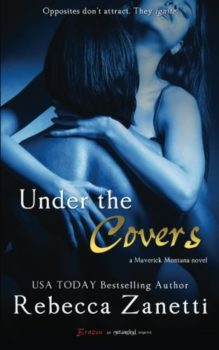 Under the Covers
by Rebecca Zanetti

The small Montana town near the Kooskia reserve seemed like the perfect place for Juliet Montgomery to hide from her not-so-law-abiding family. But when her peace is shattered by a break-in and threatening phone calls, it’s clear someone back in New York knows where she is. It’s time to plan her getaway, and fast—but first, she needs to tie up a few loose ends and find out exactly what the town’s sexy cowboy sheriff is hiding.

Sheriff Quinn Lodge has enough demons of his own to know when someone’s hiding something, and he’s determined to uncover what’s beneath Juliet’s uptight, city-girl exterior—preferably one piece of clothing at a time. But when their chemistry goes from fizzy to full-on explosive, things start getting complicated.

How can Juliet stay beneath the covers with Quinn, when doing so means blowing her cover?

Originally published May 2013 in eBook format.