How many angels must die to save one human life?

The ritualistic murder of a Catholic archbishop before the altar in his cathedral scrambles the lives of an ex-seminarian turned criminal profiler, an ex-priest turned cult leader, and the former nun they both desired. Ruptured personalities engage in a crime drama with religious, cultural, and familial conflict. Old relationships split asunder while new ones emerge. Who must die? Who will survive?

“A master of psychological suspense, Mike Krentz’s characters are never who they first seem. Krentz takes his readers on a tense, gripping journey across decades and countries to explore the darkness deep inside the human psyche.”
—Kelly Sokol, award-winning author of THE UNPROTECTED 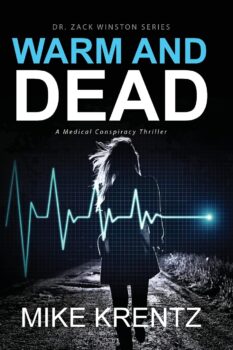 Following a civilian career as an emergency physician, Mike rededicated his professional life to serve America's Navy and Marine Corps heroes and their families, and to honor their sacrifices in defending our freedom and way of life. His last active duty assignment was as 7th Fleet Surgeon on board the flagship, USS BLUE RIDGE.

Dr. Krentz sits on the Board of Directors of The Muse Writers Center, where he teaches fiction writing and leads an advanced fiction studio.