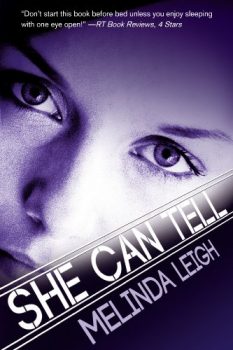 She Can Tell
by Melinda Leigh

When a terrible accident abruptly ends her riding career, Rachel Parker returns to Pennsylvania to rebuild her family's horse farm. But her welcome home is anything but warm. Her sister's abusive husband and a violent vandal threaten Rachel's new business and her life. Someone is systematically trying to destroy her. Someone who knows private things about her. Someone who's been watching her. Now Rachel must face the fact that the sins of her carefully hidden past have returned to haunt her...

Police Chief Mike O'Connell never had trouble drawing the line between his personal life and his job'until he met Rachel Parker. Mike's investigation uncovers a shocking number of secrets and suspects. But the stalker's escalating violence convinces him he doesn't have much time to sort through it all. Whoever is watching Rachel wants her dead. Mike and Rachel race to untangle a web of deceit and lies that stretches two decades into the past'before her stalker strikes again.